Showing posts with the label Holocaust
Show all

JewishGen is pleased to announce that a new data set has been added to Holocaust Database. This is a small collection, put together by the World Jewish Congress, with 639 names of Polish Jews found in Hungary immediately after the end of the war. Some of them had fled from Poland to Hungary to escape deportations to death camps in Poland. In other cases, there is no explanation as to how or why they ended up in Hungary. Since most of these survivors entered the postwar displaced persons system, in many cases it is possible to establish their final destination by searching the databases of the United States Holocaust Memorial Museum ( https://www.ushmm.org/ ) and Bad Arolsen ( https://arolsen-archives.org/en/ ). The material consists of surname and given name, year and place of birth and residence in 1939. An unusual addition to this list is the mother’s given and maiden name. This list of Polish Jews in Hungary was produced by the World Jewish Congress April 18, 1946. It is one l
Post a Comment
Read more 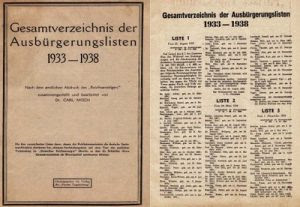 JewishGen is pleased to announce that this new significant data set,  Reichsanzeiger  –  Revoked Citizenship and Property Seizures 1933-1945,  has been added to the Holocaust Database. Beginning in 1933, the German Government revoked German citizenship for tens of thousands of German Jews as well as persons seen as political opponents,  e.g . communists.  This affected not only persons resident in Germany, but also persons who had left Germany and were resident in other countries.  It took similar action against persons resident in parts of Czechoslovakia which had been annexed.  Less well known was the revocation of business licenses or even seizure of firms which had been owned by Jews or political opponents.   These public actions, totaling nearly 90,000 names of persons and firms, mixed together, were regularly published in the  Reichsanzeiger , the German equivalent of the  Federal Registry.   In 1985, a compilation of the citizenship revocations was published in book f
Post a Comment
Read more
More posts